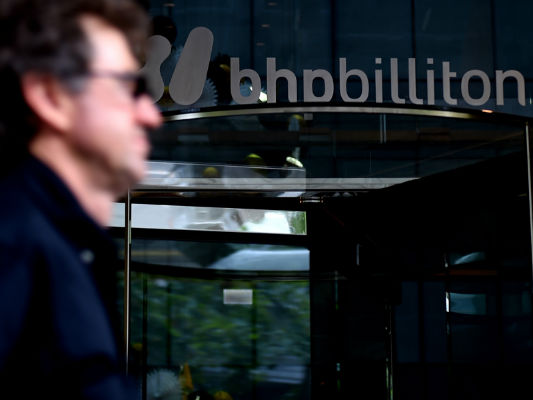 BHP Billiton has suffered a record full year loss of $US6.39 billion ($A8.29 billion) after plummeting oil and iron ore prices and the Samarco mine disaster wreaked havoc with the global miner’s bottom line.

The resources giant has also forecast commodity prices to remain volatile in the near term but chief executive Andrew Mackenzie has pledged to continue to cut costs and reduce debt to emerge stronger from the downturn.

“While commodity prices are expected to remain low and volatile in the short to medium term, we are confident in the long-term outlook for our commodities, particularly oil and copper,” Mr Mackenzie said, as BHP unveiled its full-year results after the close of Australian trading on Tuesday.

The global miner expects to lift volumes across its all its divisions – except the troubled US shale operations – by four per cent this year but has pledged to slash costs across the group by a further 12 per cent and deliver $US1.8 billion in productivity gains.

As a result, it hopes to more than double free cash flow to $US7 billion in the year to June 2017.

BHP Billiton’s underlying profit for the year to June 30, 2016, was down 81 per cent from a year ago to $US1.22 billion, as lower commodity prices stripped $US10.7 billion in earnings.

The slide comes on the back of a massive $US7.2 billion writedown in the value of its US shale assets in January, after oil prices slid to their lowest level in more than a decade.

The company also took a $US1.4 billion hit related to the costs of the Samarco mine dam disaster in Brazil, which killed at least 19 people and polluted a major river valley.

The results were slightly better than analyst expectations of a $US7 billion net loss and underlying profit of around $US1 billion.

While the results were “very disappointing”, the underlying performance of the business is getting stronger and the balance sheet remains strong, Mr Mackenzie said.

Earlier this month, rival Rio Tinto posted its weakest underlying profit in more than a decade and warned of tough conditions ahead.

The BHP boss reaffirmed that view, saying the recent rebound in iron ore and other key commodities looked to be a temporary jump on the back of stimulus measures in China.

“Our view has not changed. We continue to believe that in the near term iron ore prices have more risk on the downside,” he said.

Iron ore and coal account for about half of BHP’s revenue.

Earlier this year, BHP said it will stay away from large scale exploration in iron ore, coal and potash, shifting focus to allocate nearly all of its reduced exploration budget to conventional oil and copper – areas where its sees maximum long-term growth potential.

On Tuesday, the company said it would trim its capital expenditure budget for 2016/17 to $US5 billion from $US6.4 billion previously, but would slightly increase spending in FY18.

It declared a final dividend of 14 US cents a share, down from 62 US cents a year ago, but in line with its new dividend policy of paying a minimum 50 per cent of underlying profit.

* Full year dividend down 76pct to 30 US cents per share