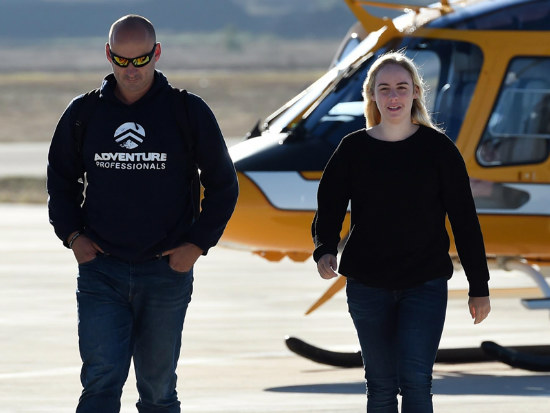 It’s a chapter Australia’s youngest Everest climber, Alyssa Azar, has been waiting to write for more than a decade.

It’s also third time lucky after dicing with death amid earthquakes and avalanches each autumn since she was 17.

But the 19-year-old could say it was all worth it on her return to Toowoomba in a hero’s homecoming.

“It’s something I’ve dreamt about since I was about eight years old,” she said on arriving home on Tuesday morning.

“That one day I was going to climb Mount Everest.”

The Queenslander can now sit down to gather thoughts of determination, self-doubt, apprehension and ultimately elation after completing the record-breaking expedition on May 21.

That afternoon in Nepal, in her third attempt at the summit in as many years, Ms Azar broke the mark held since 2005 by then 21-year-old Rex Pemberton.

A book describing her expeditions, which began as an eight-year-old at Kokoda, is set to be launched in September.

After being blessed with far better weather than 2014 and 2015, the mountaineer said the toughest part of her quest was a long, hard day of trekking between base camp and camp two before her tilt at the summit.

That’s where she suffered from most self-doubt.

“There’s a lot of moments where, honestly, you think ‘I’ve just got to get through the next 10 steps’,” Ms Azar said.

“It’s completely mental … you just break it down into smaller pieces.”

She now has plans to complete the seven summits – the highest peaks on each continent – as well as another Everest tilt and also leading Kokoda treks in the footsteps of her adventurer father Glenn.

The pair has even discussed completing a father-daughter Everest expedition.

“One half of us is keen and clearly capable,” Mr Azar said.

“The other half is not so sure yet.”

Ms Azar left a photograph of her 12-year-old brother Christian, who has autism, on Everest’s peak and said she spent a large part of her 20 minutes on the summit reflecting on all of her preparation.

“I think it just makes it that much more special when you’re up there,” she said.

Ms Azar recalled passing Melbourne’s Maria Strydom, who died from altitude sickness, on her descent but only later realising who she was.

“It was difficult,” she said, adding that there were no signs Dr Strydom was in trouble.

“You always think in hindsight – even though at that point it wasn’t too much of an issue – could we have done something, given her oxygen or tried to get her down to camp two for a rescue.”